Computer Programming at the White House 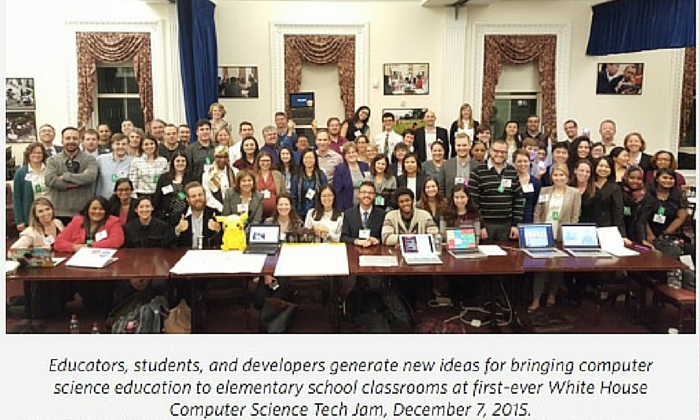 Invited to the White House?!

About three months ago, my colleague, Lauri Brady and I were invited to the White House (yep, the one in Washington D.C.) to attend the White House CS Tech Jam. At first, we questioned whether or not this was actually legit. Why would we be invited to attend this event? We decided it was too good to pass up and sent our R.S.V.P. I’m so grateful that we did!

What Were We In For?

Who would have thought to spend an entire day in a single room could be so exciting and powerful? We entered the room where the event was taking place inside the Eisenhower Building. After brief introductions, we were put into teams. My team was comprised of four people: two of us were educators, one was a computer programmer, and one was a business owner (a programming business, of course!). We set out to work to come up with something that would bring computer science into the hands of many.

We worked for hours. We went through the stages of the design thinking process and finally came up with an idea that would push us forward, a hub where people could share their stories around computer programming. Then, guess what? The time was up. We pitched our idea, listened to others, and then were able to do a gallery walk to learn more from the other teams.

Needless to say, I was pretty pumped up. However, that was just the tip of the iceberg. Before we left, one of my teammates, Jason Hoekstra, said, “I’d like to continue working on this.” We were all in agreement and have been meeting virtually since that time.

Our next tentative meeting is in two weeks. Here, we will discuss where we’ve been and brainstorm how we are going to get this project moving forward. It just so happens that another teammate, Pamela Vong, does a lot of work with Women Who Code. The DC chapter is having a hackathon at the end of the month and she would like to make our project available to them to work on. How cool is that?

So, how did I get involved with computational thinking when I work with eight and nine-year-olds? I think the bigger question is, how couldn’t I?

A couple of years ago, I heard about the first ever Hour of Code thanks to my colleague, Debbie Bieber. She, along with Lauri Brady and myself, worked to expose colleagues to computer programming and computational thinking. “Hour of Code” turned into hours, weeks, and months of code! Am I an expert programmer? Not even close, but I am willing to tinker, try, and give the children opportunities to learn by doing.

Since that time, Lauri and I have developed a course through Eduspire, called Computational Thinking and Coding in the Classroom. One of the things I find most valuable about the course is the collective knowledge we are able to leverage and take back to learners. I have often heard, “We are better together.” This course has given me the unique opportunity to spend time with others who are interested and excited to bring computational thinking to their learners. It is my hope that we continue to nurture this initiative!

Amy is a primary school teacher in Central York School District. PBL, using technology to transform learning, community building, and collaboration are a few of her learning passions.

Amy has been an educator since 1991. She has early childhood education, elementary education, reading specialist, special education, and principal certificates.

Besides that, Amy is a Connected Coach with PLP Network and is a Google Certified Educator. She was nominated as a Keystone Technology Integrator in 2007 and returned in following years as a learning facilitator.

Amy also blogs professionally, and you can access her blog by clicking the icon below this bio.